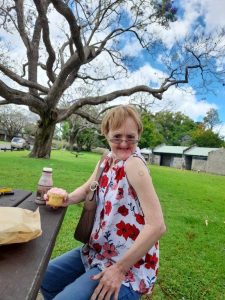 “Debbie has gained back her independence since having her PEG removed. Now she can choose what she wants to eat and drink as well as feed herself without assistance. It has given her confidence when out in the community that she can sit down and eat at a café or restaurant.” – Caringa Australia Support Worker Bridgette Lynch

Debbie joined the Caringa Australia community in 2015 to be supported at one of Caringa’s Supported Independent Living houses. Since being in her early 20s, Debbie has received all nutritional needs via a Percutaneous Endoscopic Gastrostomy (PEG) feed tube. Debbie’s nightly routine consisted of being connected to a feed pump while having to sleep wherever she received this vital assistance. Debbie’s days were also regularly interrupted by hydration sessions to keep her fluids up.

“Receiving her nutrition through her PEG tube really disrupted Debbie’s day” said Caringa Support Worker Bridgette. “She would spend a lot of time sitting around, waiting for it to be over.”

Despite these challenges, Debbie never complained and continued to engage in group and individual activities at home and in the community – a true testament to her spirit and resilience.

When the NDIS rolled out, Debbie’s opportunities were expanded with the help of her Coordinator of Supports, Donna.

Donna linked Debbie’s NDIS funding to allow formal supports such as an Occupational Therapist, Speech Therapist and Dietitian to assist and investigate whether Debbie could receive her nutrition orally again. Under guidelines set by health professionals and with the consistent assistance of her team of support workers, Debbie incrementally began to receive food and drink orally again.

As time went on Debbie’s oral intake slowly took over her overnight nutritional intake. By late 2020 Debbie was not requiring any food or fluid via her feed tube. Debbie’s support staff noticed instantly Debbie was enjoying the benefits of a good night’s sleep.

“This was a great change for Deb as she could now have a decent night’s sleep without the feed pump whirring away in the background.” Says Debbie’s Operational and Practice Leader, Shayne. “No more tubes connected overnight.

In early 2021 Debbie had her PEG tube removed. “Debbie has blossomed since having her PEG removed.” Stated Bridgette. “It’s very evident in her mood and how she is interacting in day-to-day life. It’s also been fun figuring out what types of foods she enjoys – just last month she tried devilled sausages and loved it so much!”

As of June 2021, Debbie successfully had her existing PEG site sealed and is now focusing on enjoying life and her newfound independence.